Think You Know the Avengers? Here are 10 things you may not know. 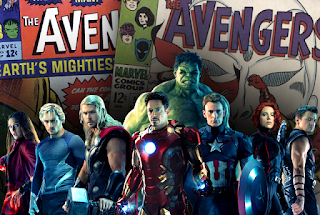 Going to see Avengers: Age of Ultron this weekend? You'll probably want to brush up on the sprawling history of Marvel's top super-squad. On September 10, 1963, The Avengers #1 brought together Iron Man, Thor, Ant-Man, The Wasp, and Hulk to battle the Asgardian trickster Loki, and the Marvel universe has been a little safer ever since. More than five decades, 500 issues, and one record-shattering movie later, the team dubbed “Earth's Mightiest Heroes” stands out as one of the legendary duo Stan Lee and Jack Kirby's greatest creations.

Over half a century of history, an ever-changing roster of Avengers has assembled to tangle with all kinds of enemies. And like most long-running superhero teams (*cough* X-Men *cough), the ongoing narrative has gotten pretty confusing at times. Thankfully, you don't need to be an Avengers scholar to appreciate some of the most interesting aspects of the team's long and storied history. Luckily, you don't need to read all 51 years' worth of issues to enjoy the newest Marvel blockbuster. Just use these 10 nuggets to regale your fellow fans in the box office line.

The Marvel movie-verse may have cast America's favorite super-soldier as a founding member of the team, but Captain America didn't actually join up until the fourth issue of The Avengers comic series. The team—which had dropped to four members due to the Hulk's departure—encountered a mysterious, frozen man in the ocean while chasing Namor, the Sub-Mariner. Lo and behold, the frozen fellow turned out to be Steve “Captain America” Rogers. After thawing him out, the existing Avengers team granted Captain America “founding member” status in place of Hulk, and the rest is comic-book history.

If not for a delay in sending Daredevil #1 to the printer, the Avengers might never have existed. According to Marvel's Senior Vice President of Publishing, Tom Brevoort, when the publisher realized that the first issue of Daredevil wasn't going to be ready in time for its scheduled print run, Stan Lee proposed the idea of bringing a bunch of existing Marvel characters together to form a team like DC's Justice League of America. By doing so, they wouldn't need to create complicated origin stories for the individual members, which would allow the squad to jump right into whatever adventure Lee and Kirby could come up with on short notice. The pair brainstormed for a while and came up with the Avengers, then hastily put together the first issue and sent it off to the printer.

3. THE WASP CAME UP WITH THE TEAM'S NAME 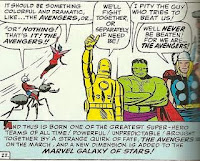 After the five heroes of The Avengers #1 decided to work together, they needed a name. Thankfully, the size-changing heroine Janet van Dyne—a.k.a. The Wasp—was there with the right suggestion. “It should be something colorful and dramatic like 'The Avengers,' or...” she said, only to be interrupted by Ant-Man. “Or nothing! That's it! The Avengers!” he announced.

One can't help wondering what her second suggestion was going to be—and why she was left out of the movie series, given this key moment in the team's history.

Since their earliest rosters, the Avengers have always experienced a lot of turnover. After Hulk left in the second issue, the team added Captain America in the fourth issue, only to have everyone except Captain America depart the team in The Avengers #16. The original four members were quickly replaced by three new additions: Quicksilver, Scarlet Witch, and Hawkeye. These rookie Avengers were interesting choices for a top super-team since they were previously villains in the Marvel Comics universe. Few superhero teams had ever undergone such a unique lineup change, and the transition is still regarded as one of the most amazing stunts a superhero comic has ever pulled.

It only took a few years for Marvel to realize they had something special in the Avengers, so it's no surprise that the publisher didn't trademark the team's name until 1970. However, the company ran into some trouble when the 2012 movie screened across the ocean, as the British version of the The Avengers—a spy series that aired during the 1960s—pre-dated Marvel's superhero team. The legal wranglings were eventually settled with some clever re-titling of the film in certain markets, including Marvel Avengers Assemble in the UK.

6. THE AVENGERS #1 HIT SHELVES THE SAME MONTH AS UNCANNY X-MEN #1

The Avengers weren't the only new team to hits newsstands in September 1963. Marvel's merry team of mutants also made their debut that month in Uncanny X-Men #1, and the two teams' paths have crossed plenty of times over the course of their adventures.

The team has had many “honorary members” over the years—usually friends, family, and allies who have assisted the team in its battles. The first-ever inductee as an “honorary member” was Rick Jones, the man Bruce Banner saved from a gamma bomb's explosion by sacrificing his own body. Rick later became the Hulk's “sidekick” of sorts and was instrumental convincing the new team that Hulk wasn't the evil behemoth they originally believed him to be. In later issues, Tony Stark's butler, Jarvis (a human in the comics, not the computerized entity familiar to movie fans) was also granted “honorary member” status.

8. NOT EVERYONE ACCEPTS AVENGERS MEMBERSHIP

Of the many heroes who have been offered membership in the Avengers, several prominent characters turned the team down at one point or another. Both Spider-Man and Daredevil initially declined to join the team when offered a spot on the roster, with the two heroes each offering a similar reason for their decision: They want to keep their crime-fighting close to home. It's worth noting, though, that both heroes did eventually join the team, but only in recent years—long after they were first offered membership.

9. EVEN SUPERHERO TEAMS CAN FRANCHISE

The Avengers may be the team that unites to battle threats that no single hero can handle alone, but what if there's more than one threat? That's the question that the team hoped to answer with West Coast Avengers, a team that debuted in 1984 and featured several members of the Avengers roster splintering off to form a new group of heroes based in Los Angeles.

With the original Avengers team handing things from their headquarters in New York City, the new team—led by Hawkeye—kept the other side of the country safe from supervillains. Subsequent years—and the popularity of The Avengers among readers—would lead to several more spin-off teams and series outside the primary The Avengers series, such as the Secret Avengers and New Avengers.

Some of them were even a bit unofficial, such as the hapless, accident-prone Great Lakes Avengers, who often managed to save the world despite their own ineptitude.

10. THE AVENGERS HAD A CROSSOVER WITH DAVID LETTERMAN IN 1984 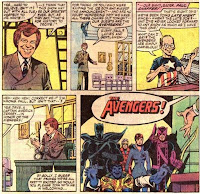 Yes, you read that correctly. Way back in 1984, Late Night With David Letterman was cruising along at the height of its popularity and The Avengers was doing pretty well for Marvel. Naturally, the powers-that-be saw serious crossover potential. The result was a single-issue story that saw several members of The Avengers—including Hawkeye, Black Panther, Black Widow, Wonder Man, and the X-Men's Beast—appearing on Letterman's show, only to be ambushed by a pitiful villain who attempted to fry them with camera-mounted lasers. Letterman saved the day, though, when he hit the bad guy over the head with a giant doorknob. Seriously. This actually happened.